This is a guest post by Jacopo Ottaviani, Italian freelance journalist and developer. The story it tells was published in the Italian newspaper Il Fatto Quotidiano.

Currently in Italy many prisoners die every month in jail. According to an independent dossier by the Italian non-profit association Ristretti Orizzonti (lit. Narrow Horizons), almost one thousand deaths were registered in the last ten years (2002-2012). Most of detainees who died committed suicide (57%) or died of sickness (20%). Another relevant number of prisoners deceased in unclear circumstances (19%); the rest of drug overdose (26 cases) or omicide (11 cases). Such death rate underlines inadeguate conditions in which prisoners are forced to live in.

The data journalism project I am now introducing is intended to map deaths in prisons in terms of locations and causes. The whole project has been published by Il Fatto Quotidiano (lit., The Daily Fact, a young yet leading newspaper in Italy) and on the Guardian Datablog. However, an English version is also available. 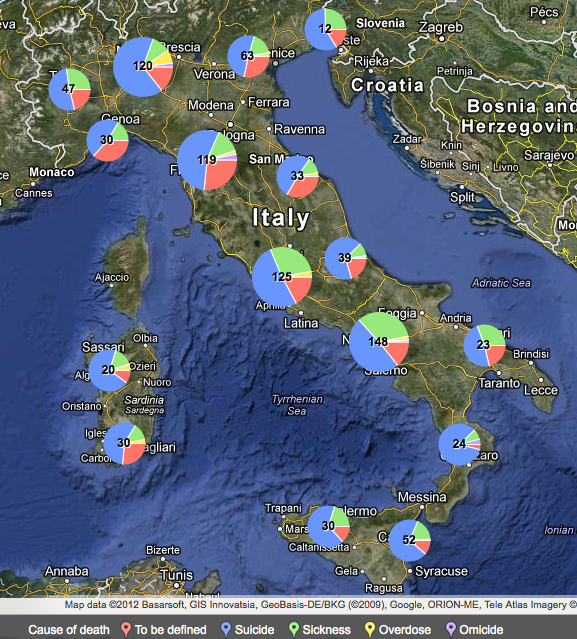 The development process was based on a series of step, each of these working through free-of-charge tools. ScraperWiki was one of those: two scrapers were coded, extracting 1276 rows of data.

Two sources of data were scraped and crossed: the dossier released by Ristretti Orizzonti and the data published on the Minister of Justice website. The former lists the actual casualties, reporting names, dates, causes and prisons’ names, the latter provides addresses of prisons in Italy.

An overview of the development follows.