The role of an intern is often a lowly one. Intern duties usually consist of the provision of caffeinated beverages, screeching ‘can I take a message?’ into phones and the occasional promenade to the photocopier and back again.

ScraperWiki is nothing like that. Since starting in late May, I’ve taken on a number of roles within the organization and learned how a modern-day, Silicon Valley style startup works.

It’s not uncommon for computer science students to be taught some project management methodologies at university. For the most part though, they’re horribly antiquated.

ScraperWiki is an XP/Scrum/Agile shop. Without a doubt, this is something that is definitely not taught at university!

Each day starts off with a ‘stand up’. Each member of the ScraperWiki team says what they intend to accomplish in the day. It’s also a great opportunity to see if one one of your colleagues is working on something on which you’d like to collaborate.

Collaboration is key at ScraperWiki. From the start of my internship, I was pair programming with the many other programmers who are on staff. For those of you who haven’t heard of it before, pair programming is where two people use one computer to work on a project. It’s nothing like this:

This is awesome, because it’s a totally non-passive way of learning. If you’re driving, you’re getting first-hand experience of writing code. If you’re navigating, then you get the chance to mentally structure the code that you’re working on.

In addition to this, every two weeks we have a retrospective where we look at how the previous fortnight went and where the next steps we intend to take as an organization. We write a bunch of sticky-notes where list what was good and what was bad about the previous week. These are then put into logical groups. We then vote for the group of stickies which best represent where we feel that we should focus our efforts as an organization.

What We Work On

Perhaps the most compelling argument for someone to do an internship at ScraperWiki is that you can never really predict what you’re going to do from one day to the next. You might be working on an interesting data science project with Dragon or Paul, doing front end development with Zarino or making the platform even more robust with Chris. As a fledgling programmer, you really get an opportunity to discover what you enjoy.

During my time working at ScraperWiki, I’ve had the opportunity to learn about some new, up and coming web technologies, including CoffeeScript, Express and Backbone.js.  These are all pretty fun to work with.

It’s not all work and no play too. Most days we go out to a local restaurant and get some food and eat lunch together. Usually it’s some variety of Middle-Eastern, American or Chinese. It’s also usually pretty delicious! 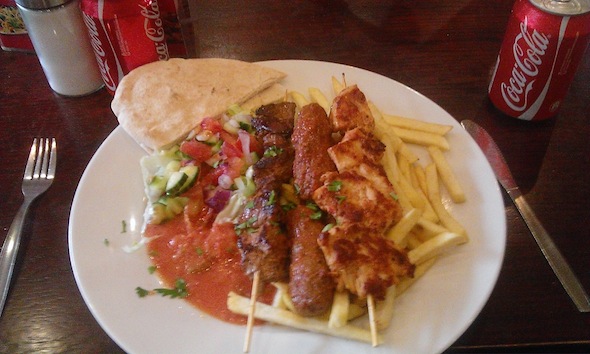 All in all, ScraperWiki is a pretty awesome place to intern. I’ve learned so much in just a few weeks, and I’ll be sad to leave everyone when I go back to my second year of university in October.

Have you interned anywhere before? What was it like? Let me know in the comments below!

View all posts by Matthew Hughes →