With a second tube strike scheduled for Tuesday I thought I should provide a useful little tool to help travellers cope! It is not obvious from the tube map but London Underground stations can be surprisingly close together, very well within walking distance.

Using this tool, you can select a tube station and the map will show you those stations which are within a mile and a half of it. 1.5 miles is my definition of a reasonable walking distance. If you don’t like it you can change it!

The tool is built using Tableau. The tricky part was allowing the selection of one station and measuring distances to all the others. Fortunately it’s a problem which has been solved, and documented, by Jonathan Drummey over on the Drawing with Numbers blog.

I used Euston as an origin station to demonstrate in the image below. I’ve been working at the Government Digital Service (GDS), sited opposite Holborn underground station, for the last couple of months. Euston is my mainline arrival station and I walk down the road to Holborn. Euston is coloured red in the map, and stations within a mile and a half are coloured orange. The label for Holborn does not appear by default but it’s the one between Chancery Lane and Tottenham Court Road. In the bottom right is a table which lists the walking distance to each station, Holborn appears just off the bottom and indicates a 17 minute walk – which is about right. 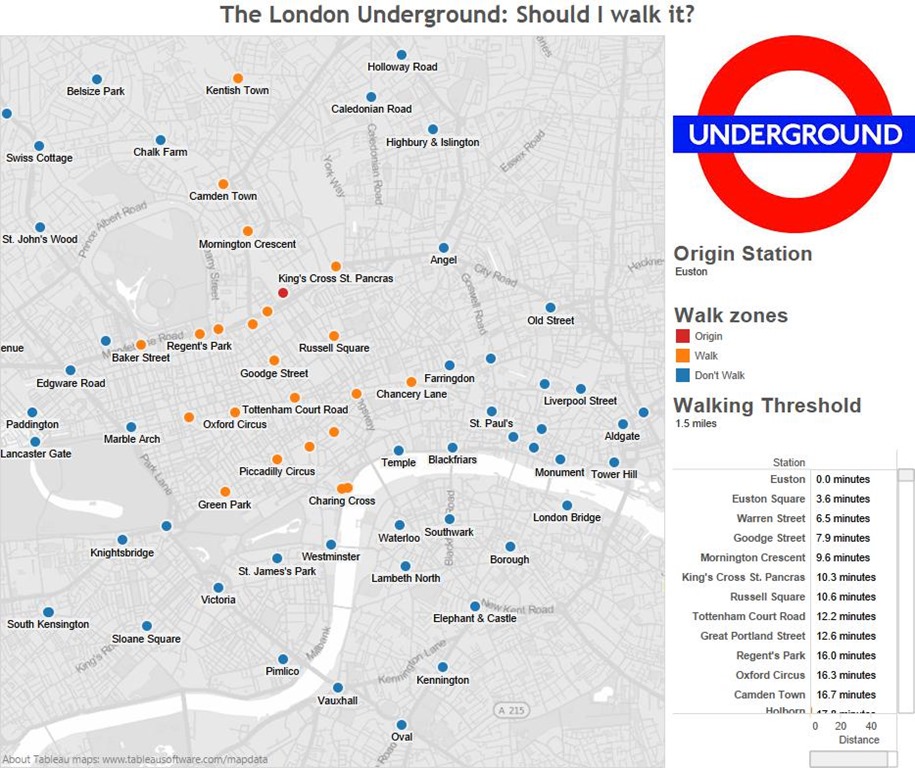 The map can be controlled by moving to the top left and using the controls that should appear there. Shift+left mouse button allows panning of the map view. A little glitch which I haven’t sorted out is that when you change the origin station the table of stations does not re-sort automatically, the user must click around the distance label to re-sort. Any advice on how to make this happen automatically would be most welcome.

Distances and timings are approximate. I have the latitude and longitude for all the stations following my earlier London Underground project which you can see here. The distances I calculate by taking the Euclidean distance between stations in angular units and multiplying by a factor which gives distances approximately the same as those in Google Maps. So it isn’t a true “as the crow flies” distance but is proportional to it. The walking times are calculated by assuming a walking speed of 3 miles and hour. If you put your cursor over a station you’ll see the name of the station with the walking time and distance from your origin station.

A more sophisticated approach would be to extract more walking routes from Google Maps and use that to calculate distances and times. This would be rather more complicated to do and most likely not worth the effort, except if you are going South of the river.

Mine is not the only effort in this area, you can see a static map of walking distances here.